A bunch of crap

by clint_j
Comments are off 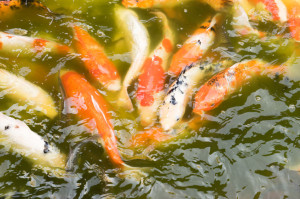 There’s no pretty way to say it.

While a good deal of what we do at the Granger-Hunter Improvement District revolves around the crystal-clear water that comes out of your faucet every day, delivered from our own eight deep-water wells and the Jordan Valley Water Conservancy District, we do have our, um, dark side, too.

Twenty-five percent of the 55 million gallons of wastewater treated daily at the Central Valley Water Reclamation Facility comes from the Granger-Hunter district. And when you consider there are thousands of other places doing the same around the world, you KNOW some interesting things have, well, come through the pipes.

Here’s a few of the most news-worthy discoveries:

• When the movie “Finding Nemo” came out, experts said “grinding Nemo” would be a more appropriate title. But in Calgary, Canada, it appears that a number of goldfish flushed down the toilet have not only survived the trip but continue to multiply in the city’s sewer system.

• In 2009, Japanese water treatment workers pulled nearly $56,000 in gold from the sewers. It’s believed the gold comes from Nagano precision equipment manufacturers who use the precious metal in their processes. And in this case, there are few complaints!

• Easier to understand are the number of false teeth water treatment centers see come through the pipes. Be honest; would you want them back?

• No doubt the biggest load of crap – make that fat – is the London fatberg that grew to the size of a bus! Didn’t we warn you about the dangers of F.O.G.?

• And closer to home, there’s the Orem Phantom Dumper. As you might remember, a still-unknown entity in 2016 and early 2017 shoved small pieces of fibrous insulation into the city’s sewer system, costing taxpayers more than $90,000 in clean-up costs. If there was a silver lining to the situation, the city said, it is that industries have become more attentive to what they’re inadvertently sending through the sewers.

We could go on and on, telling about the unrecognizable jawbones, bicycles, luxury watches and 600-pound Texas gator. But the moral to our story is this – please be careful about what you flush down the toilet, rinse down the drain and hose down the street drains. It’s costly, it wastes water and it makes our job a lot harder.

Join us in bringing it to an end!

Do you know how to walk safely on ice and snow?
No Responses.

Why is there fluoride in my water?
No Responses.

Be water-wise in your yard this summer
No Responses.

Preventing dehydration and other heat-related illnesses
No Responses.